State Rep. Galonski (D-OH) to charge Trump with crimes against humanity at the Hague

Ka-Pow, by John Hinderaker from Powerline:

Haley Stevens is an actual Congresswoman from Michigan. She tweeted this, and apparently has deleted it since her Republican opponent started using it in his fundraising appeals: 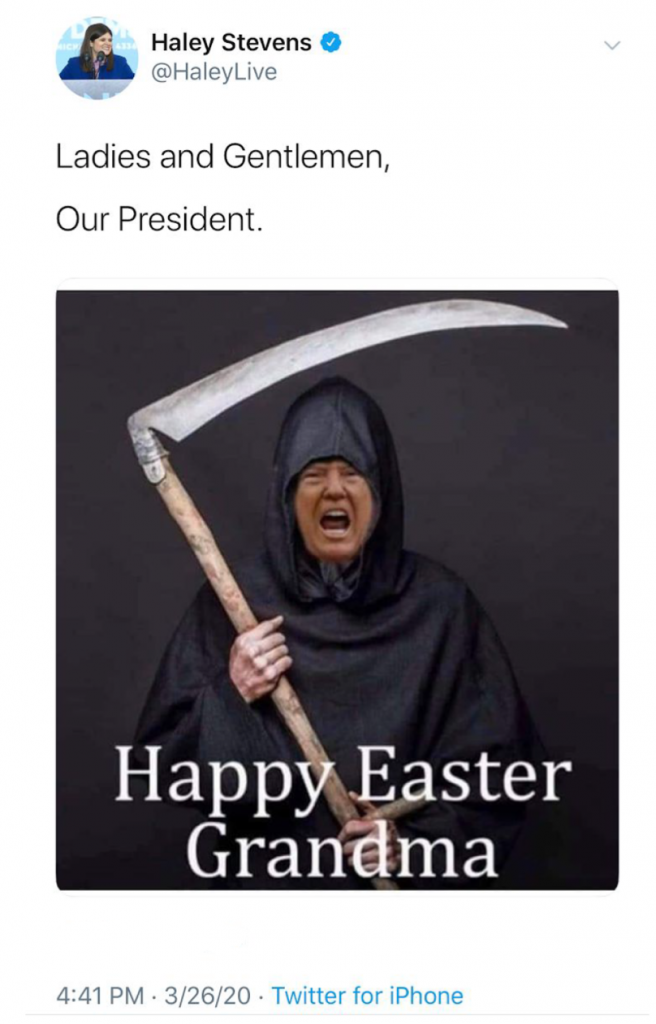 Then we have state Rep. Tavia Galonski of Ohio, who tweeted this:

I can’t take it anymore. I’ve been to The Hague. I’m making a referral for crimes against humanity tomorrow. Today’s press conference was the last straw. I know the need for a prosecution referral when I see one. https://t.co/XQin24gqY4

Galonski’s vow to charge Trump with crimes against humanity at the Hague was applauded by a large number of Democrats. What was the president’s “crime against humanity?” Apparently, his suggestion during a press briefing that chloroquine could prove to be an effective treatment for the Wuhan virus.

There isn’t much point in trying to talk rationally to a guy in an asylum who thinks he is Napoleon. Likewise, there probably isn’t much point in trying to talk rationally to a Democratic politician or activist in 2020 America. But for what it is worth, let’s just note that 1) the variants of chloroquine are all prescription drugs that will not be administered absent a prescription by a doctor, who probably doesn’t intend to commit a crime against humanity; 2) numerous studies have found chloroquine compounds, alone or in combination with other drugs, to be effective treatments for COVID-19 sufferers; 3) chloroquine has now been approved by the FDA as a COVID-19 treatment; and 4) even assuming that the president was wrong, making a wrong prediction about the efficacy of a drug treatment is hardly a “crime against humanity.”